Foreign Secretary Liz Truss has set a 48-hour deadline for a fishing dispute with France to be resolved before the UK moves ahead with legal action.

Speaking to Sky News at the COP26 climate change summit in Glasgow, Ms Truss hit out at the French for behaving “unfairly” and accused them of operating outside the terms of the Brexit trade deal.

France has warned, without more fishing licences being granted by the UK for its vessels to fish in British waters, it could ban British vessels from French ports.

And the dispute has also revived a French threat to raise the price of electricity supplied to Jersey, in the Channel Islands, via underseas cables.

“The French have made completely unreasonable threats, including to the Channel Islands and our fishing industry, and they need to withdraw those threats,” Ms Truss said.

“Or else we will use the mechanisms of our trade agreement with the EU to take action.

“What that means is that we will use the dispute resolution mechanism, which could lead to taking direct action in trade.”

The foreign secretary added: “The French have behaved unfairly, it’s not within the terms of the trade deal.

“And if somebody behaves unfairly in a trade deal, you are entitled to take action against them and seek some compensatory measures.

“That is what we will do if the French don’t back down.”

Ms Truss said the issue “needs to be resolved within the next 48 hours” before the UK moves ahead with legal action.

The foreign secretary suggested next April’s French presidential election could be a motive behind Emmanuel Macron’s stance over the fishing row.

The dispute also follows on from French unhappiness with the AUKUS security pact announced between Australia, the UK and US in September.

“But what I would say to the French is that we are fellow freedom-loving democracies – we should not be fighing with each other, we should be focussing our efforts on working together.

“This is not a zero-sum game, we can both benefit by trading more with each other, by working together on issues like security and defence.

“We need to move beyond these unreasonable threats and instead work together.” 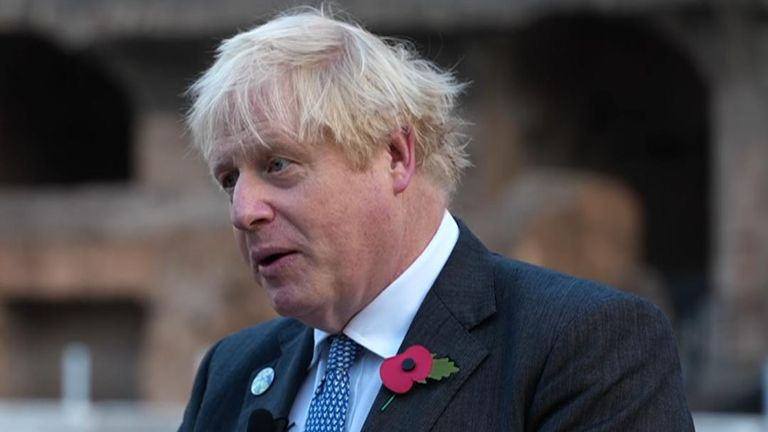 PM ‘worried’ that treaty may have been broken on fishing

As part of the fishing row, France has claimed its own retaliatory measures could also include the imposition of physical checks on lorries travelling to and from the UK.

This has led to fears of long queues on either side of the Channel, which could snarl up shipments ahead of Christmas.

And Ms Truss did not deny the UK was looking at other European ports as a trade route.

She said: “In general it’s important for the UK to diversify our trade and not become dependent on a single source of imports, or indeed, a single destination for our exports.

“So I fully support diversifying our trade and making sure we’ve got options, because that puts us in a stronger position.”

Subscribe to the All Out Politics podcast on Apple Podcasts, Google Podcasts, Spotify, Spreaker

COP26 is set to become the second major international summit hosted by the UK this year to be marred by a Brexit row with France.

It comes after this summer’s G7 summit in Cornwall was dominated by the “sausage wars” with the EU related to post-Brexit arrangements for Northern Ireland.

But Ms Truss warned the current fishing dispute “cannot be allowed to overshadow what is the most important conference in a generation”.

“Everybody knows how important it is getting the climate change agreement we need,” she added.