Hundreds of people were unable to travel by train from London to Glasgow for the first day of the COP26 climate summit today after a fallen tree and severe weather sparked rail chaos.

The travel disruption earlier today was caused by damage to overhead electrical wires between Rugby and Milton Keynes on the West Coast Main Line.

Travellers expressed their frustration at the delays on social media, with many alluding to the extreme weather on the first day of COP26 being a reminder of the impacts of climate change. 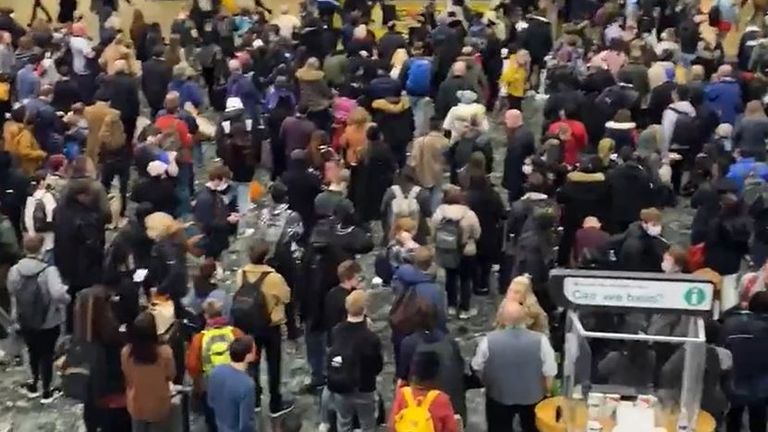 COP26: Trains to Glasgow delayed by tree on tracks

Meanwhile, the Met Office said the delays were sparked by torrential rain and gusts of more than 80mph winds across the country.

Krish Kandiah, a global ambassador for the charity World Vision, sent out a warning about the UK’s public transport infrastructure as he struggled to get to the climate conference in Glasgow.

“Here we are arriving a very significant climate conference and the British public transport doesn’t seem to be up for the task.”

Elsewhere, LBC’s Westminster correspondent Ben Kentish added some people booked flights in order to get to COP26 and said it was “embarrassing”.

Mr Kentish wrote on Twitter: “Lots of people with tickets on trains to Glasgow for COP26 are now having to book flights instead because of the shambles that is the UK rail network.

“Highly embarrassing start to the conference.”

Network Rail soon issued a statement advising people to travel to Glasgow on Monday instead.

“We’re advising passengers seeking to get from London to Glasgow to travel tomorrow,” a spokesperson said. “This is due to the impact extremely heavy rain and strong wind has had on the railway today.

“All lines north have been affected at times including the West Coast main line, which remains impassable due to damaged overhead electric wires.

“We are truly sorry for this. We exist to get people and goods swiftly from A to B. But today’s extreme weather got the better of us.

“Overnight our engineers will repair damaged overhead wires near Rugby with a view to getting passengers moving tomorrow.”

South Western Railway also apologised to customers after trees blocked part of the network, which caused cancellations, delays and alterations to services.

It advised passengers to “only travel if essential”.

Meteorologist Tom Morgan said the Met Office suggested there may have been some “localised tornadoes” in some regions.

He said: “We’ve got a deep Atlantic area of low pressure that’s bringing a very heavy band of rain and squalling winds across the whole of the country, but particularly in the south of England.

“We’ve seen some very strong gusts of wind on the south coast… and a few reports of damage from the winds.

“It’s not out of the question that there will have been some localised, brief funnel clouds or tornadoes.

“In the last couple of days we have seen some reports and seen some photos of funnel clouds and water spouts, which are similar to tornadoes.”

Follow live coverage on web and app with our dedicated live blog.

Get all the latest stories, special reports and in depth analysis at skynews.com/cop26