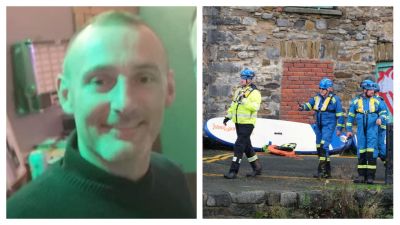 Three people have died and one remains in hospital following a river search in Haverfordwest.

Police, fire crews and a Coastguard helicopter began searching the River Cleddau in Haverfordwest on Saturday morning after reports of people in distress in the water.

Police said a group of nine adults from the south Wales area had travelled to Pembrokeshire for a paddleboarding excursion before getting into difficulty in the water.

Two women and a man died at the scene, and a woman remains in critical condition in hospital. A further five people were rescued without injury.

One of those who died in the incident is Paul O’Dwyer, ITV Wales understands.

Company Salty Dog paid tribute to Mr O’Dwyer on social media and said: “It is with heavy heart that we say goodbye to our salty dog Paul. A lovely human being taken too soon.

“Our thoughts and prayers are with your friends and family. You will be missed greatly.”

Josh Cuggy, who is a friend of Mr O’Dwyer, also paid tribute to him describing him as a “force to be reckoned with.”

In a tribute he said: “There’s no words to describe how I or anyone else feels about the loss of Paul.

“He was a force to be reckoned with, absolutely unstoppable in his pursuit of excellence and raising money for charities, including his own SA1UTE soldiers charity.

In September, Mr O’Dwyer organised a paddleboard journey between Aberavon and Mumbles for charity which raised over £2,000 for the RNLI and a local lifeguard club.

Mr O’Dwyer was also a veteran who set up an armed forces charity alongside military Lee West.

Paying tribute to him, Lee West said: “We’ve been best friends for 22 years. We met in the military and he was one of those people you just clicked with. We had the same sense of humour, the same sense of adventure and we hit it off straight from the start.

“I had only messaged Paul yesterday about meeting up to talk about charity plans after lockdown. It’s hard to believe that I will not now ever get a reply from him or go on our crazy adventures.”

Those involved in the incident and their families are being supported by specially trained officers.

An investigation into the incident is currently underway.

The Quay Street area of the town was closed for several hours on Saturday and a police cordon remained at the scene until 5pm.

Police have also informed the Marine Accident Investigation Branch (MAIB) and a team of inspectors have been sent to the town to carry out an assessment of the incident.

Haverfordwest Councillor, Thomas Baden Tudor, said the incident was a “terrible tragedy” and described how the river was flowing at a “terrific rate” on Saturday.

He said: “I would like to extend my sympathies to the families who have lost loved ones in this tragedy and I would like to thank the emergency services for their brave efforts in tackling this issue.“

First Minister Mark Drakeford said in a statement he was “deeply saddened” by the incident.

He said: “My thoughts are with the families and friends who have lost loved ones in this heartbreaking tragedy. “Thank you to the emergency services and everyone who tried to assist with the rescue efforts.”